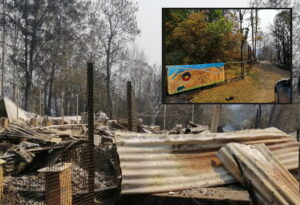 In November Uncle Terry and Auntie Kim Hinton saw their entire house and contents explode explode in flames before their eyes. It was one of 17 houses obliterated in the tiny village of Bobin, west of Taree.

They were uninsured. Only one item remained near the rubble of their house: this painting celebrating NAIDOC Week, which they created together on an old door and had hung on the front fence.

This was what remained or their house. When Terry returned to see the ashes, even the painting was gone – evidently stolen.

Terry is an indigenous elder who has lived with his wife Kim in Biripi country, in the Manning River Valley, for more than 30 years. They have long participated in and supported the indigenous culture and community.

He says: “The biggest loss for us was my power tools and hand tools and my wife’s paints and brushes, which we use to create cultural objects – coolamons, boomerangs, didgeridoos and chapsticks, as well as rainbow serpents and other paintings.”

Our Fundraising appeal is for $25,000 to pay for replacing these items, plus the daily and ongoing needs of a household.

Use this page to make donations using PayPal.

Uncle Terry attends the Taree Mens Group.
The fundraiser has been created and is being
managed by other members of the group.

Terry Hinton and his wife Kim lost their home and everything they owned on Friday 8th November, when fire destroyed 17 houses – almost the whole of the tiny village of Bobin, in the hills west of Taree. They had no insurance.

Terry, who is 67, is an indigenous elder who has lived in the region’s Biripi country for over 30 years. He uses his knowledge and skills to support Aboriginal ceremony, making a range of artefacts: boomerangs, spears and woomeras, digeridoos and clapsticks, shields and coolamons.

Kim is a painter, who while living in Bobin (a “special place” for her) created rainbow art, including rainbow serpents, butterflies and bilbies, some on her husband’s boomerangs. She lost all her paints, brushes and easels.

Terry and Kim are seeking funding in particular to replace his entire lost set of tools – more than $10,000 worth of power tools and as much again in hand tools – and Kim’s painting gear. Their objective is to raise $25,000.

On the day of the fire, Terry drove his vehicle out of a garage already burning, put his wife and dogs into the utility, and turned to see his house less than 50 metres away literally explode before his eyes. Kim was diagnosed with lymphoma three months ago. Before the fire she had to travel five days a week for three weeks for radiation therapy to Port Macquarie over 100 kilometres away. Her treatment will recommence soon.